At our club's last game night we did a rare refight of the Battle of the Pyramids, using a slightly modified version of the popular Blucher ruleset. Participants included Doug (Ibrahim Bey) and Daniel (Moodrad Bey) as the Mameluk leaders, with Will (Berthier) and his young son Arthur (Napoleon) as the French!
The game was played in mighty 2mm; mighty, because this scale really lets you go-to-town on mostly scratch-built terrain -- which is great fun.
The actual battle was a walkover for the French, due mostly to their use of pretty much impervious divisional squares and the medieval stupidity of the Mameluks.
Our Mameluk leaders, however, had learnt a thing or two about operations and tactics. Using all of the tools in their toolkit, they turned both French flanks and wore them down. For their part, the French deviated from their use of squares and advanced in Ordre Mixte, exposing themselves to massed Mameluk attacks (although those units which stayed in divisional square throughout didn't take a single loss!). The result: a smashing Mamluk victory. Loses, though, were about even.
Thanks to Doug, Daniel, Will, and Arthur (who looked quite the young Buonaparte!) for being adventurous and taking part.
Posted by The Dying Gaul at 10:35 No comments:

I've had these 1:2400 Micronauts (mostly) lying around for awhile and thought that it was about time they should be painted up (oh, that mountain of lead!). 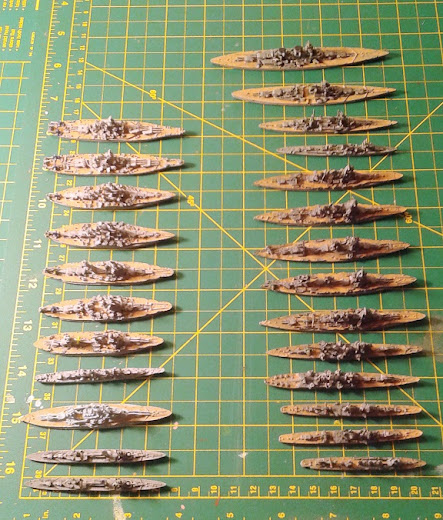 I've been really lazy with my gaming during COVID, but I finally got it together enough to finish augmenting my Ancient Greek 6mm collection, which is something I've been meaning to do for some time.

The below show about 1200 figs arrayed on some 60 stands, deployed for the Battle of Delium, 424 BC. Stands are on 40mm fronts. The entire battle is on about a 48 inch front. The reason the bases look a little different from each other is because they were done in different batches, years apart (oh, well).

Athenians are on the right, facing the Theban led Boeotians on the high ground to the left. Thebans themselves are stacked-up in eight ranks on the Boeotian right.

There are many rules to choose from, but I will probably go with Big Battle DBA, with a few important modifications.

Next step is to build appropriately scaled buildings, walls, and triremes from Roman Seas (which I've already downloaded). Then the whole Peloponnesian War is a go! 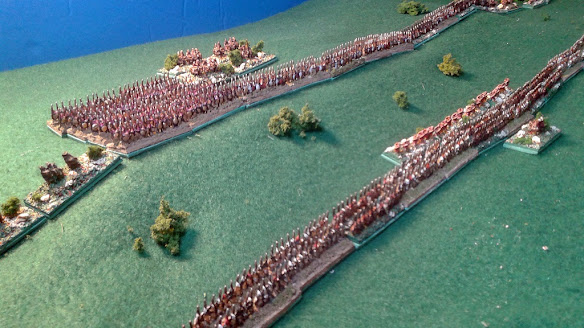 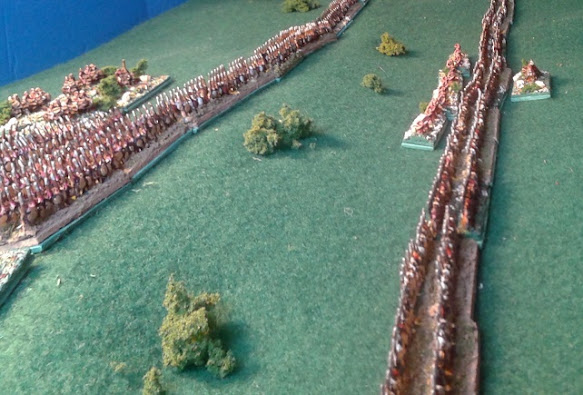 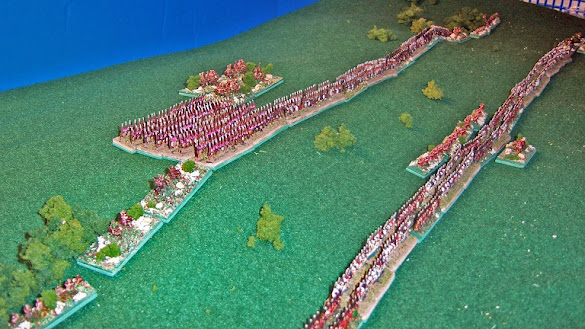 A while back I encountered this plastic model kit at the local hobby store, and it took me right back to the fifth grade. What red-blooded Canadian boy didn't own an Aurora model Guillotine at one time or another (along with Frankenstein, Wolf Man, Godzilla, etc.)?
So, working under the logic that if you haven't grown up by the time you're 50 then you don't have to, it had to come home with me.
It sat in the closet for a couple of years, but what with COVID and all I thought it was time to give it a build.
I could have smeared the blade, basket, etc., with blood like I did when I was a kid, but that would be tasteless.
Posted by The Dying Gaul at 23:02 No comments: 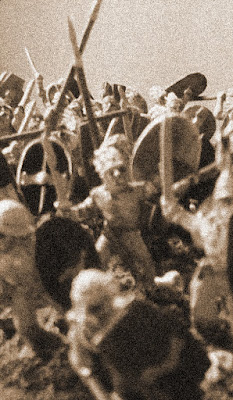 Having read through Will B's background on his Jhamjar Rising alternate history campaign I've been running through my own limited 28mm collection to see what would fit. It was a stretch to see what could conceivably work, but I think I hit on something that would add colour to the campaign.

The Roman historian Quintus Curtius Rufus relates that during Alexander the Great's campaign in Afghanistan he came across a Greek people named the Branchidae, who were the descendants of some Greek mercenaries that had fought for the Persians. They welcomed Alexander and their fellow Greeks with open arms, but Alexander considered them the sons of traitors and massacred them out of hand.

I've got six dozen ancient Gauls who could pass for the long lost descendants of the survivors of the above massacre. They found refuge deep in the hidden valleys of the Hindu Kush where they lived for generations, retaining their ancient ways. They eschew firearms, of course. Led forth by a contemporary adventurer, they seek to redress ancient wrongs.

Upon retirement from the Indian Army the Colonel decided to pursue his hobby: the anthropology and ethnography of the Himalayas. He came upon above Branchidae and lived with them for many months, thus establishing an affinity with those peoples. It was while there that he heard of the traitorous outrages committed by the current Djelli of Jhamjar.

Unable to constrain himself, Utterly-Barking has led the Branchidae out of their mountainous fastnesses against the Djelli. In this he is aided by the Greek translator and mystic Costa Logikí, and by an assortment of fellow-travelers: for example, the ex-patriot American freebooters, the 'Friends of Blanco Posnet' (who are probably just in it for the cash).

Below are some pictures of their march southwards. These were captured by a wary photojournalist (who is something of an free-booting adventurer in his own right!). They are the only evidence we have to date of the Colonel's activities.

'Shall Not the Roundhead Soon be Confounded?'

Will brought in his Jacobite Rebellion paper army to our local club in February, and along with them the rules for 'Rebels & Patriots' (of the 'Lion Rampant' school of thought).

This motivated me to modify the rules for fighting a big battle with my own 2mm nano-scale English Civil War collection. This I did, and hosted the same at the Trumpeter's Gaming Society in March.

Below is an account of the resulting the Battle of Edgehill (1642) re-fight, with myself as umpire and with Ian, Chris and Gary kind enough to give it a try.

A big shout-out to Will for lending me his camera!

The Parliamentarians won a protracted cavalry battle on their right and followed up with their infantry in the centre. The Royalist Brigades of Foot eventually gave way after a long fight, thus leaving Rupert's Cavalry wing isolated.

The cavalry on the Parliamentarian left were strangely inactive throughout the battle, but Rupert's Royalist Horse could not come to gripes with them (lots of bad activation dice rolling by poor Rupert!). And while Parliament's left were pushed back as far as the town of Kineton, the Royalist could do nothing to exploit this by battle's end. 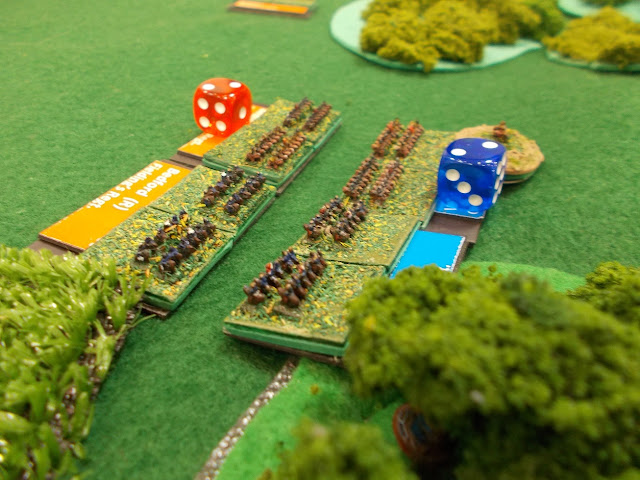 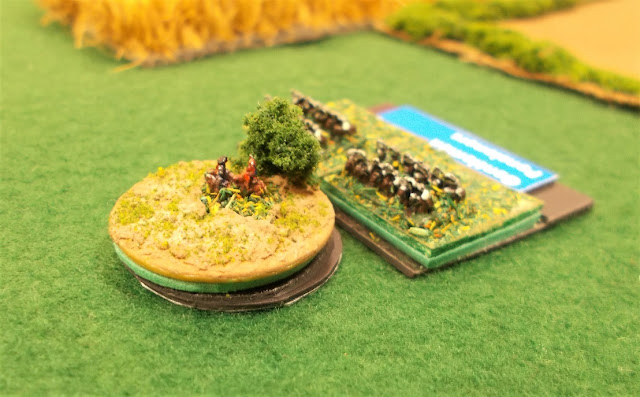 A strange episode from the battle: With his left threatened, King Charles led his last reserve -- the Gentlemen Pensioners -- in an attack on some Parliamentarian Horse. He routed Fielding's Regiment from the field... and then pursued them off to the far left, thus abandoning his army! Did he think, in the smoke-filled swirl of battle, that he was charging into the heart of the enemy position? Or did he think that his army was done for and decided to do a runner? Or did he simply loose his tiny 2mm mind? 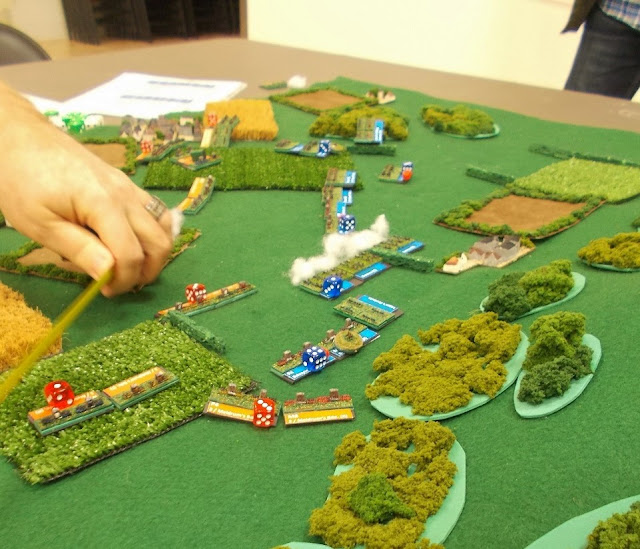 Last moves: Ian seals off the what's left of the Royalists, and with them their fate. With their left gone, along with four of their five infantry brigades (and Charles himself!), Rupert throws in the towel.

Game was a chess-like and interesting one that kept everyone engaged. Once again, these rules proved impressive for their flexibility and simplicity.  Thanks to Ian (Essex), Chris (King Charles/Rupert), and Gary (Ramsay) for taking part.

So,was the Roundhead confounded? Not this time! Below is the Royalist recruiting song that the title of this blog posting was taken from:


What, though the zealots pull down the prelates,
Push at the pulpit, and kick at the crown;
Shall we not never once more endeavour,
And strive to purchase our ancient renown?
Shall not the Roundhead soon be confounded?
Sa- sa- sa- say, boys; ha- ha- ha- hey, boys,
Then we'll return with triumph and joy!
Then we’ll be merry, drink claret and sherry;
Then we will sing, boys, ‘God Bless the King!’ boys,
Cast up our caps, and cry, ‘VIVE LE ROY!’

What, though that ‘wise-ache’ Alderman Isaac
Puts us in prison and steals our estates;
Though we be forcèd to be un-horsèd,
And walk on foot as it pleaseth the fates;
In the King's army no man shall harm ye!
Then come along, boys, valiant and strong, boys,
Fight for your goods, which the Roundheads enjoy!
And when you venture London to enter,
And when you come, boys, with pike and drum, boys,
Isaac himself shall cry, ‘VIVE LE ROY!’

If you should choose Charles (do not refuse Charles,
Since ‘honest Parliament' ever were thieves!),
Charles will not further have rogues dripped in murder,
Neither by pardons, long life, or reprieves;
Such propositions and conditions
Will not be granted. Then be not daunted!
We will our honest old customs enjoy!
St. Paul's, now rejected, shall be respected,
And in the choir, voices sing higher,
Thanks be to heaven, and cry, ‘VIVE LE ROY!’

The Dying Gaul Welcomes You!

The Dying Gaul
Welcome to The Dying Gaul: Miniature Wargaming with Horrid Little Men. Why The Dying Gaul? Because that's how I seem to spend most of my time on the wargames table! Why 'horrid little men'? This is in tribute to my elderly aunt, who, upon seeing yet another new box of Airfix 20mm figures, once uttered the prophetic words, "Why are you wasting your time with those horrid little men?" So let it be written. So let it be done. On this page you'll find a number of miniature wargames projects that I've been working on, pictures of past games, and those from my developing collection. There's a lot to post, so please check back from time-to-time. Hopefully, you won't find what's here too horrid!